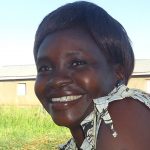 My name is Aringo Doreen Daniel I was born in Torit in around early 80s and did not have a birth notification certificate but according to the Doctor’s Assessment, he declared that I was born in the year 1978. When the Sudan Civil war between the Arabs from the North and the African tribes of the then Southern Sudan reached its peak, we ventured into exile as unaccompanied minors and ended up in a refugee settlement camp where I started and accomplished my primary education. Being an unaccompanied minor, there was no one who could help me get to a secondary school by that time. Fortunately, later on, after some time, a catholic Church organization offered me a four-year secondary school scholarship and I was able to attend secondary education from 1995 to 1998 and that led to the attainment of a Uganda Certificate of Education (UCE).

In the year 2000, the same church organization gave me another educational opportunity. This time I studied at the National Center for Early Childhood Development, Nairobi Kenya and became an Early Childhood Development (ECD) Instructor or schoolmistress and was employed to teach the Nursery Kids as part of the Catholic Church’s Contribution to the development of children as preparatory for their primary education at the Settlement Camp (Achol-Pii Refugee Settlement Camp, Kitgum District-Uganda but currently part of Pader District) where I was registered as a refugee.

It is from here that I started knowing or understanding the problems and suffering of women and children due to their vulnerability especially during time of war or war related situations and in the Refugees Setting where a lot of attention was needed to curb the situations that were emerging at the time.

During the progress of my ECD training we did a Health and Nutrition Course Unit and it became a driving force that inspired me a lot, one time, there came a situation when I witnessed children dying of ignorance-caused malnutrition in the settlement camp. Without hesitation, I voluntarily started sensitizing mothers with the help of Traditional Birth Attendants (TBAs) on how to care for the nutrition needs of their kids by preparing a balanced diet from the available family food within the locality.

In 2002, Achol-Pii Refugee Settlement camp was overrun by the Lord’s Resistance Army Rebels (LRA) and we were temporarily relocated to Kiryandongo Refugee Settlement Camp in Masindi District of Uganda. That very year, I was employed by the International Rescue Committee (IRC) an American Non-Governmental Organization in the Created Post of a TBA Supervisor at the Settlement Health Center as a reward for my voluntary work. Thereafter, we were finally settled in Ikafe Refugee Settlement Camp in Yumbe District-Uganda where I continue with the Job up to 2007 when the United Nations Refugee Agency repatriated us back home since there was relative peace already in Sudan (The Comprehensive Peace Agreement Signed by the late John Garang De Mabior and Omer Hassan El Bashir of the Sudan).

In the year 2009 following the repatriation, Africa Action Help (AAH) a Non-Governmental Organization offered me a midwifery certificate scholarship and I studied at Maridi School of Nursing and Midwifery in Western Equatoria, Southern Sudan for a certificate Course that I successfully accomplished in 2010 and it earned me a job with Torit State Hospital. Due to lack of registered midwives, I was sent for short courses to upgrade my skills so as to cope with the situation at the State Hospital and I remained an employee of Torit State Hospital to date where I offer the Following Services: –

In 2016, after appraising my performance, I a UNFPA Hired Medical Doctor who was attached to the Maternity at Torit State Hospital advised me to pursue a Diploma Course in Midwifery with an aim of uplifting my skills to become a Registered Midwife, but unfortunately I could not make it after Juba College of Nursing and Midwifery had offered me a place to study at a fee cost that I could not afford though I was and still am very much interested to upgrade.

I have a family, Borther Daniel Oliha and I, got married in 1999 and are blessed with three sons namely: Ronald, Erickson and Brian. They are 13, 11 and 9 years old respectively and so have been happily married throughout.